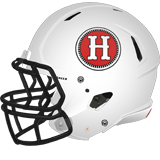 It was the kind of break-out game that we had been hoping for, but as the season wore on, became less and less likely that we would see.  The Panthers faced off against a Marple Newtown team with a similar record in what was expected to be a close, well-fought game with Haven being the decided underdog (at least based on the reporters at the Daily Times).  After a scary first few minutes of play where the Panthers gave up the ball on the second play and watched the Tigers march down the field and score the boys in black and silver came roaring back and never looked back.  A total of 462 yards over 55 plays (average a whopping 8.4 yards per play) Haven scored 8 touchdowns, made two interception and recovered two fumbles, converted 3-for-3 4th downs. Jake Fisher led the team as quarterback, scored three touchdowns (the first one a twisting, head over tail leap into the end zone (Webmaster’s note: Jake, don’t ever do that again!) and was also the team’s lead tacker with 12 tackles (4 unassisted) and how about John Wilson who made the two interceptions in the game and recovered one of the fumbles. It was one of those games we will all remember.

The final regular season game is this Friday night.  The Harriton Rams (1-8)  will visit George L. King Field. The Rams started out the season with a win over Valley Forge Military Academy but things went south pretty quickly. They played their sister school, the much improved Lower Merion Aces, and lost 24-0.   Jack Rosenfeld (#1) and Teddy Molineaux (#2) are their “go-to” guys on the ground.  Their defense is anchored by Harry Thomas (#4), Jack Baldwin (#8) and Sam Segal (#10).  They do have a field goal threat in Evan Tracy (#41).

Haven needs to come out this Friday and play solid football on offense and defense.  A well balanced attack on the ground and some air play will encourage the confidence they will need to face a favored opponent in next week’s first round playoffs.  Stopping the ground game is a critical skill Haven must improve. Mistake free football will be the key to this game’s success and securing the highest seed possible for the playoff season.

Kick-off is at 7:00 PM at Strath Haven Middle School (across the street from the high school). If you can’t make the game you can always listen to our broadcast right here at Havenfootball.net.  Our broadcast will begin at 6:45. The game will be available on our archives within a few hours after the game concludes.  You can also check in on Twitter for score updates.