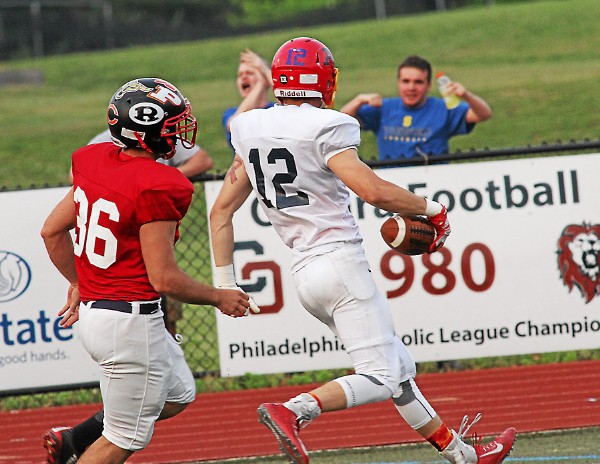 The East team didn’t want it to end. After the clock hit zero, after their 36-7 domination of the West was final, they figured out ways to prolong the night.

First it was a team picture, then it was a round of shoutouts, then they reminisced about their two-and-a-half weeks together. Finally, they broke away, the joy of their Hero Bowl victory Thursday at Cardinal O’Hara still evident on their faces.

“We told the kids from the beginning, we wanted to create a great experience,’ said East coach Drew Pearson, who leads the Delco Christian program. “They came out and they just played.’

The East team did that in this annual Delaware County all-star game, which benefits the Hero Scholarship Fund, with a squad made up of senior stars from Springfield, Strath Haven, Radnor, Upper Darby, Academy Park, Interboro, Penn Wood, Haverford and Bonner-Prendergast. Previously, the teams were split up according to their leagues.

This year, they changed course and rough cut a geographically based mix. The result was a great night for the East and a rough night for the West.

(Webmaster’s note: If you missed the game you can listen to our broadcast in it’s entirety by clicking on the link at the top of this page to our Archived broadcasts)