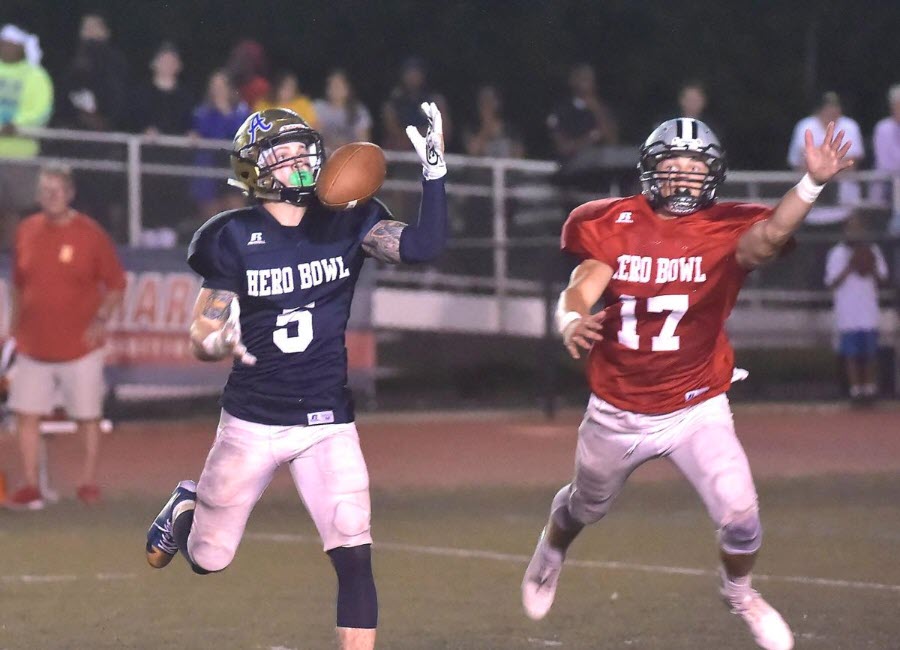 Sun Valley’s Julz Kelly makes an amazing catch for a 20-yard pick up in the second quarter as Jake Fisher of Strath Haven defends. Photo by Pete Bannon, Medianews group

“Coming out here again at O’Hara, it’s a great feeling,” he said.

For Perri, the opportunity to play for great cause hit even closer to home.  Last year, Newtown Township Police Sgt. Clinton Cunningham died suddenly from a cerebral hemorrhage. He was 37.

Cunningham was an admired policeman and a loving husband and father of four children. Shortly before his untimely passing, Cunningham was named “Officer of the Year,” an award voted by his peers in the police department.

Perri could smile, knowing he gave everything he had in the Hero Bowl. He did it all with Sgt. Cunningham in mind.

“This is going to his family,” Perri said. “It means a lot to play in this game.”

Perri, who earned All-Delco honors for his performance as a two-way lineman in 2018, helped the East (Blue) squad to a 22-12 victory over the West (Red).

All proceeds from the Hero Bowl benefit the Hero Scholarship Fund of Delaware County, which provides scholarship support to the children of police officers, firefighters and emergency medical personnel who have sacrificed their lives in the line of duty.

Webmaster’s note:  The complete audio broadcast recording of the 43rd Annual Hero Bowl is now available in the player above.  A huge apology to all those who attempted to tune in during the live broadcast.  Our T-Mobile connection would not work (an investigation is under way) and we couldn’t have been any more frustrated than the many who tried to tune in.