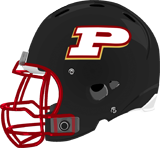 All-in-all it was not a terrible night for the Panthers last week.  They had 182 total yards, no interceptions on 5 complete passes and Haven’s worst 3 minutes of football in the opening of the 3rd quarter.  Two killers plays, virtually one right after the other, and the Panthers were suddenly trailing by 13.  The Haven defense held the Fords for the rest of the night and managed to find an effective short passing game that, low and behold, opened up the running game in the third quarter bringing Haven within six points of winning the game. Oh, and freshman kicker, Emmet Young continued his perfect ways with a second field goal (31 yards) and two extra points making him perfect for five games.  We think Friday night showed that we have the QB and the receivers to run a solid short pass game (we know there were some drops but practice makes perfect) and that will open up the ground game.  Haven was two bad plays and a couple of complete passes short of winning this game.

Penncrest is coming in with the same overall record (2-3) but with a worse Central League record (1-3).  They have been struggling.  League games they’ve lost badly to Haverford, Ridley and Marple Newtown.  They beat Harriton and Pope John Paul.  The Lions are led by #12 Chris Mills who had a very tough game against Ridley last week.  However, he is a capable runner and can pass as well.  Penncrest’s key running back to look out for is #20 Caleb Mahalik and #2 Manny Ruffin is their big ‘go-to’ receiver.  They did manage to score 26 points against PJP and 14 points against Marple.

The Panthers have a good team.  They can throw, catch and run.  Making stops on defense has seemed to be an issue as each game has seen it’s share of running backs stopped and then released as the defender fails to complete the tackle.  Holes that open up for Haven backs suddenly close as blocks are abandoned prematurely.  Fix these problems, institute a 5-7 yard passing game and continue to work at it.  The talent is there.  A solid screen pass play could also be very effective.  Haven has become much too predictable and has to show some offensive changes to shake our opponents out of their complacency.  Playoff qualifications are slipping quickly and we still need to play some real powerhouses. We believe we have the talent and drive to get it done.

Kick-off is at 7:00 PM at Louis Scott Field.  If you can’t make the game you can always listen to our broadcast right here at havenfootball.net.  Our broadcast will begin at 6:45. The game will be available on our archives as soon as the game concludes.  You can also check in on Twitter for score updates.