As many of us are sitting around and hoping for a little excitement from this week’s NFL Draft it presents an opportunity for us at Havenfootball.net to “speak” with the many student athletes that follow our pages.

We’ve been following Strath Haven football since 2002 on these pages but all of us really began following the Panthers in the mid 1990’s as we watched the juggernaut teams of the late 90’s and early 00’s just dominate the Central League, District One and traveling to Hershey for the state championship four times…..and winning two of them. 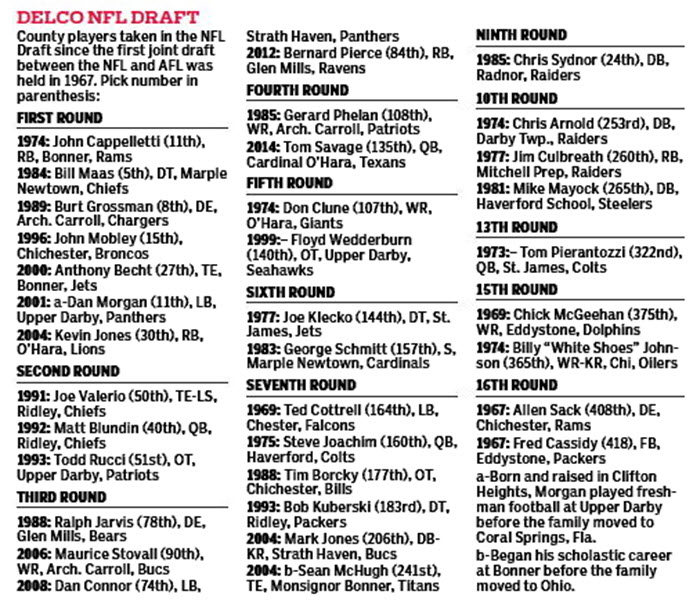 Over those two decades we have seen thousands of high school athletes compete.  We’ve seen many players who dominated the grid iron and appeared to perform at a level that was vastly superior to their fellow athletes. It has been a great ride and we’ve enjoyed every minute of it.

Our first-hand experience has presented a lesson I wish to share with all student athletes.  We all dream of making it to professional sports. Most of us give up that dream very quickly as we realize our talents are not at that level so we play for the fun and excitement of organized sports.  There are a few of us who are good enough to gain some notoriety among our teammates and our competitors as well as the local press.  A very few will be fortunate enough to gain scholarships to play the game we love in college.  Very, very few will ever be able to play at a Division One school and very few of those will ever be considered for the pros. Mr. Grotz has listed all those Delco football players who have been taken in the NFL Draft since 1967. The total is 35 players…….. taken among the tens of thousands who competed in Delco.

My lesson is a simply one.  Dream big, work hard and push yourself to achieve the most you can but don’t make plans on having a pro career.  Take your schooling seriously and give that as much effort as you put on the playing field.  Give yourself as many career options as you can.

Those of us who are well past our playing days find tremendous enjoyment and satisfaction in our memories, but our successes, achievements and memories we built AFTER our playing days are over, are what makes our lives special, satisfying and worth living.